KUALA LUMPUR: The KDM leaders in Warisan and Upko have clearly sold out their own people on the issue of the priority treatment of illegal immigrants in Sabah compared to genuine Sabahans especially the natives, said Datuk Dr. Jeffrey Kitingan, President of Parti Solidariti Tanah Airku (STARSabah),

He said he judged it through their responses to his statement on the holding of a Forum to find the way forward for illegal immigrants in Malaysia particularly in Sabah and the response of Warisan leaders published in the Warisan mouth-piece.

InDIn aDa press statement he said  by jumping against the proposed Forum, they are clearly wrong and their lame excuses merely amplify their support of the “giving illegal immigrants priority” policy under the Warisan-led Sabah government.

The Forum is now more necessary to get things done and resolve the long outstanding illegal immigrants’ problem, be it in Sabah or in Malaya, he said.

” Nothing satisfactory was done by past leadership regimes, BN or PH, on the problem in Sabah. Under PH, Warisan had 3 full ministers and 2 deputies including one in the home ministry but not only they did nothing, they worsened the problem,” he said.

Their law minister flatly rejected the idea of a Sabah IC and their deputy home minister supported all sorts of applications for ICs by foreigners.

” However, the issue is not of the past as harped upon by the Warisan-PH-Upko leaders, but what needs to be done to secure a bright future for all genuine Malaysians whether in Sabah or not.”

The present Perikatan Nasional (PN) government is a new government and with a new leadership. Unlike the past, this new PN government has shown a new Putrajaya attitude towards illegal immigrants, example on the Rohingyas and Bangladeshis, and have taken positive action to curb the PTIs, pendatang asing tanpa izin, according to him.

“We should have this new attitude applied to Sabah’s undocumented foreign illegals since the Federal government is now equally concerned with the illegal immigrants. Based on this alone with the prioritization of foreigners’ policy, the Sabah government do not deserve to the government should be changed immediately.”

Otherwise, over time, Sabah will end up being taken over by the foreigners and perhaps realize the fulfilment of the Sabah claim by the Sulu sultanate through a reverse takeover demographically. Indirectly, the Warisan KDM and Upko leaders are supporting this channel,he elaborated.

Malaysia and Sabah need to have better control of their borders and keep the country safe. The new Federal government is now more assertive to resolve the security problem and prevention of entry by foreigners illegally as well as to repatriate those already in Malaysia to their home countries.

Tacitly, Warisan wanted to keep the Filipinos in Sabah for whatever reason best known to them, perhaps even as potential voters. It is not surprising given that Warisan and PH did not win PRU-14 to become the Sabah government legitimately. he said, adding the present government is formed by the mandate of the people but immorally by frogs from Upko.

The time has come to find a long-term solution to the illegal immigrants. The circumstances now are totally different from even 6 months ago.

Warisan, PH and Upko have forgotten that they scrapped the PSS issuance after listening to the voice of the people in the Kimanis by-election who soundly rejected the Warisan candidate and the PSS policy. For the record, the PSS policy according the Home Ministry in a parliamentary reply stating that the introduction of the proposed PSS was a Sabah government initiative and not by the Federal government who merely acceded to the State initiative.

If the Warisan-led government had listened to the people and scrapped the PSS, isn’t it right to hold the Forum and listen to the people’s wishes and aspirations once again in finding the long-term solution?

“What better time than now since I am now in the Federal government unlike before” said Dr. Jeffrey.

“The Warisan, Upko and PH leaders as well as the Sabah government have done nothing during their 22 months PH government. I do not wish to be like them and do nothing. The rakyat will complain why I am not doing anything if I follow the footsteps of these leaders”.

“I am doing this for the people and for the interest and security of Sabah. The Warisan, Upko and PH leaders should be supporting me and not bombarding me with lies and insinuations. Their responses are akin to the Malay proverb “siapa makan cili, dia terasa pedas”.”

“By their actions in not supporting me, it is obvious that they, particularly their KDM leaders, are not interested in protecting the people and security of Sabah and more geared towards looking after the interests of foreigners and illegal immigrants” added Dr. Jeffrey..-pr/BNN 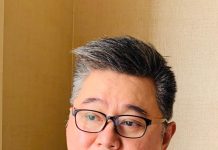 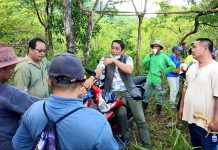 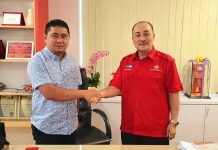